The Putnam County Rescue Squad began in 1952 and was established as a function of Civil Defense as a volunteer unit working to help the citizens of Putnam County during times of an emergency or disaster. It's primary duties were search and rescue. It began first with one vehicle, an old van donated by the local telephone company, and a dozen members at most with almost no equipment, official training, or certifications.

One of the first additional functions added was water rescue with the acquisition of a boat and trailer. At that time, it was primarily used for dragging for drowning victims. Also added, as an emergency response service, was extrication (cutting victims out of wrecked vehicles). The Rescue Squad obtained it's first Jaws of Life, seen to the left, in the late 1970s, which was a vast improvement over hand tools.

In the past few years, other functions that have emerged within the squad are swiftwater rescue, diving, rappelling/high angle/mountain rescue, school bus rescue, structural collapse/trench rescue, rural search and rescue/basic visual tracking, GPS land navigation, farm rescue, and storm spotting. The squad now has a total of 14 vehicles in four locations in the county for more rapid response, 2 boats and 1 swiftwater rescue raft, 2 four-wheelers, 2 Kubota UTV's, with Medi-Bed attached for patient transport out of rugged areas, 1 Polaris Ranger, and 4 equipment trailers all loaded with different types of equipment to enable them to perform all of the different types of rescues.

Today, the squad has grown to approximately 70 dedicated members who train vigorously and respond to calls for service at all hours of the day and night, seven days a week, 365 days a year. On average, the Putnam County Rescue Squad responds to over 1,200 calls of distress annually, with that number increasing yearly. Our members, who are dedicated volunteers, love their community and put forth their own free time and resources to be ready at all times when the call comes in! This causes members to take time away from their families and has a financial impact as well. Each member understands that any call for service can involve circumstances that are life-threatening to not only the victims of the incident, but also the rescue members.

Your tax deductable donation is appreciated! 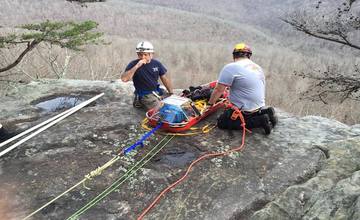